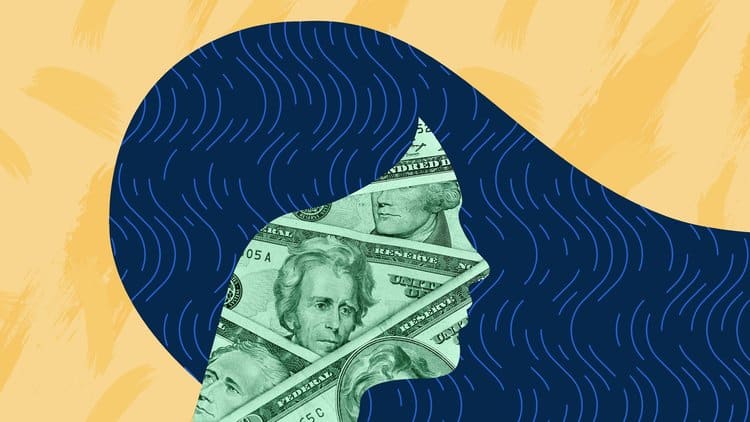 This story originally appeared on Make Change, an online magazine exploring where money and mission meet.

If I were to name the dominant emotion I feel around my money woes, it would have to be shame. I’ve run the gamut through fear, stress, anxiety, panic, resentment—but it’s the shame that’s stayed with me.

What if People Knew?

I remember hanging out with friends one night when I was 24, and the topic of student loans came up. One of the guys there mentioned his loan debt and how he would have it paid off in a few years. He and his girlfriend began talking about how they were already saving for their future children, even though they were years away from being ready to have them.

As the conversation turned increasingly to money topics, my cheeks burned with shame and my stomach knotted in anxiety. I’m never going to be able to pay off my student loans. I can never afford to have kids. I would die if everyone found out how much debt I’m in. They would lose all respect for me.

Although it’s unlikely my friends would have disowned me over my debt alone, the pattern was set. Whenever personal finance was brought up in the ensuing years, the shame would swell. I would find myself terrified someone might find me out. Everyone would know how poorly I had managed my finances. That I had no savings. Or that I was behind on credit card payments. Here I was living abroad, pretending to be a savvy, self-employed expat who had my life together. In reality, I was a total financial screw-up who had mismanaged my finances so badly I had essentially ruined that part of my life. At least, that’s how I saw it at the time.

The negative self-talk threatened to consume me, but I tried to conceal what felt like a dark, dirty secret. I would overcompensate for my lack of money by spending more than I could afford on group dinners or drinks. And I never wanted to be the person who bailed on plans because I couldn’t afford it. I was terrified of people thinking I was cheap or poor. Looking back, I can see those habits perpetuated the cycle of debt and financial anxiety. But I wasn’t operating based on a coherent worldview. I was just willing to do anything to avoid being “found out.”

Actually, It’s Not Just You

It turns out, I was in good company. Gaby Dunn, the host of the Bad With Moneypodcast, told The Billfold, “When money was my biggest issue, I didn’t want to talk about it.”

I can relate. Even though I sometimes alluded to “having, like, no money” when commiserating with friends who were also traveling freelancers? I kept my complaints deliberately vague.

Occasionally, I would break down and confide in a friend about how unbearably stressed I was. Afterward, I would feel intense shame for being such a bummer and such an anxious mess. Insecurities would flood my brain. I’d criticize myself for being not only broke, but immature, disorganized, and utterly lacking in hustle.

But shame spirals—in personal finance and in the rest of our lives—are usually less than helpful. While guilt can be instructive, shame often leads to wallowing and self-pity (or maybe that’s just me). As I mentioned in my last column, the only thing that helps when financial distress sets in is action. And you can’t act if you’re curled up in bed, imagining your imminent life on the street, wondering where it all went wrong.

The most effective action I’ve found—whether I’m deep in the bowels of shame or waking up in cold sweats over my lack of money—is being honest with myself and others. The sooner I take a clear, hard look at my finances, the faster the negative feelings recede. I feel empowered and in control. And in turn, I feel more optimistic, no matter how low the balance might be in my checking account.

How to Push Back on Shame

Being honest with other people is more challenging because it requires swallowing my pride and fears of judgment. But obscuring my financial circumstances or spending outside my means to keep up appearances simply isn’t sustainable. It’s also unhealthy for my relationships. The immediate motivation to overspend is a combination of FOMO and shame. But I eventually become resentful when I overcommit financially. though I don’t voice that resentment to my friends—I’m the one who created the situation, after all—it lingers in my mind and detracts from whatever event or activity we’re supposed to be enjoying together.

While I’m not broadcasting the balance in my savings account or offering public updates on my net worth (although I find it inspiring when other people do), I am learning to assert my boundaries when I simply don’t have the money to commit.

For instance, a therapist recommended I decide on an amount I’m willing to spend on friends’ weddings and stick to it. Anything above that amount, I would decline to participate in. The concept provoked instant anxiety because I feared disappointing people. We’re talking about weddings, after all, and everyone spends exorbitantly on other people’s marriages, right?

But the strategy also made sense. Rather than live in terror of fellow wedding guests discovering my financial circumstances are anything less than Kardashian level, I’m learning my limits. The peace of mind that brings allows me to plan effectively and be more present for these happy events.

That’s the practical side of dealing with money shame. The emotional side has been more challenging to master. But while doing research for this column, I came across writing by Kate Northrup and Bari Tessler, both of whom advocate forgiveness as an antidote for money shame. The idea struck a chord instantly.

Where Did These Feelings Come From?

They suggest money shame stems from something that happened in our financial histories, whether that’s a lesson we learned in childhood or mistakes we made as we grew older. Our negative views of money drive the crippling feelings of shame and self-doubt that perpetuate poor money management habits. Instead, we need to reflect on those lessons or events, forgive ourselves, and let the shame go.

As I read these suggestions, I could feel the ball of stress in my stomach begin to dissipate. I’ve reclaimed control of my personal finances in recent years. But I still carry a lot of shame from the past. The idea that I could forgive myself and not drag that weight through life was inspiring. How much easier would it be to gain money momentum if I wasn’t constantly beating back self-criticisms and doubts?

Financial forgiveness is a new topic for me, and it’ll probably take a few tries before it really sinks in. But I believe it’s a way forward, for myself and others. We’re always told we’re allowed to make mistakes—in school, at work, even in relationships. The key is to learn from them so we can avoid the same pain in the future. Why should our finances be any different?

Sign up for the Make Change newsletter for more articles exploring where money meets mission.